So the trip had been in the making for sooooooo long and we had a small window in the weather for Friday May 29th, the "who’s available?" call goes out, Hairy Little Dwarf, New2Yaking, and Mental step up to the mark…

Thursday May 28th
So get home from work, pack the car full of all that gear I’ve been preparing all week, live bait rigs, poppers, jigs, rapala, various giant plastic baits, all my Kingi bases were covered! And on top of all that I threw in a few soft bait bits and pieces to throw around while the live baits bobbing around under a balloon…

New2Yaking turns up at my place, we load his gear into my car and off we go, 200m down the road – oops forgot the gaff, turn around and pick it up will need that for those big kingis!

A two and a half hour trip to the Tutukaka Hoilday Park sees us in our cabin teaching New2Yaking how I set up my soft bait gear.

Friday May 29th, 5:30am
Alarm goes off, get up, grab a quick tin of beans for breakfast, get all geared up, and we head down to Pacific Bay to meet HLD, all kayaks rigged and ready to go

The bay was nice and flat in the harbour but as we reached the heads the story changed, the entrance ws more like a washing machine, with a good 2m swell coming in and bouncing off every rock we were getting a battering.

Personally I’ve fished in worse conditions but not N2Y and he made the call to stay in the harbour, good on him I say, our sport can be daunting and dangerous at times, when it doesn’t feel right for you that’s exactly when you should pull the pin, good call mate.

HLD an I carried on to our pre-chosen spot in North Gable, about a 3 km paddle from the harbour entrance. Sun came up on the way there.

At North Gable and the swell didn’t get any better really, when we got there fishing for kings was pretty much off the menu as our target pin was now awash with white foam making it impossible and unsafe to fish so we decided to paddle slowly back to the harbour prospecting all the way.

I had seen a wreck marked on the marine chart in North Gable the day before to poped that in my GPS and headed out to it, found it on the sounder and could see plenty of sign, so dropped a 7 inch softie down and bang I could see the fish come 5m+ up off the bottom to hit my bait, locked it up and got a very healthy bend in the rod, lots of string pulled and 10 minutes later up pops a 14lb (estimate) Snapper, poped it in the yak, paddled over to HLD for a quick photo and back it goes to fight another day.

By the time the photo was taken and the drift I was now way off the wreck to decided to go hunting else where. Couldn’t find anything for about a hour, and the roll of the sea was taking it’s toll on my tin of beans, they were then deployed as burley, no they didn’t work, no fish to be seen anywhere…

Went looking around the rocks found nothing, drifted into a spot where HLD had been ten minutes earlier and pulled up a nice 12lb (estimate) Snapper, thought about weather or not keeping it for a feed for just long enough for the Snapper to make a bid for freedom off my lap, so that decision as made…

Gave up on the wash fishing and headed to the center of Middle Gable where I found a very nice looking patch of foul in the middle of one very large bay of nothing, on the sounder the foul looked to be holding what looked like a single large fish (or 2/3 small ones huddling together).

So down she goes, this time it’s just a 5 inch Lime Tiger, just what was on there from my wash fishing, again positioned myself so I can see the bait going down on sounder, and again there it is, the fish is coming up to meet the bait, ok, flick the bail arm, the rod bends double, and line screams from the reel, holy, what is this? I had just tightened up the drag on the last couple of fish so this has to be bigger, or fitter

HLD comes over and I pull it up, "Nice fish, very nice fish", I said "what you reckon, 20lb?", he said more like "21lb". Cool ok, I’ve got my first 20lb from the kayak! Then comes the part where you find out just how easy it is to slide a big fish into the well… yea right!

We then call it a day and paddle back to the harbour to see how N2Y is getting on, my stomach makes doubly sure on the way back that there are no more beans left in there… Swell is stil hanging around outside the entrance.

So we then paddle back into the harbour to find that the swell stlil isn’t there and N2Y has caught a couple of throw back Snapper and a John Dory (which he also threw back, didn’t know the size limit…) Had a nice paddle back in to a very flat Pacific Bay.

Couple of photos on the beach:

Photo taken back at home. 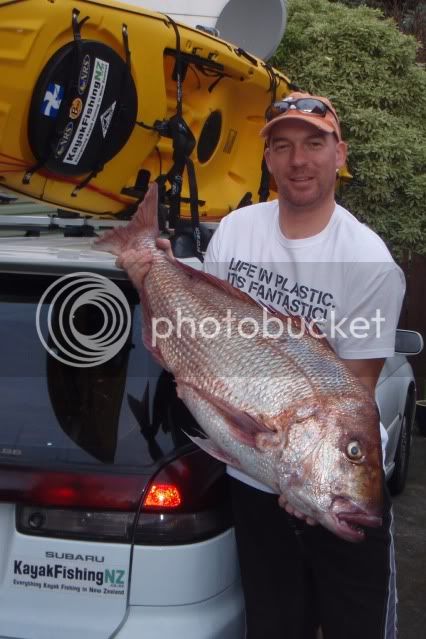 Just like to say thanks to HLD and N2Y, had a great time with good company, thanks guys!

Oh my god dude, that is freaking huge. You would have kept your family fed for a week with that monster.

Mate, thats awesome! He’s huge! I bet the heart was racing! Good for you bud!

hey there, great story, what sounder are you using? cheers