Here you go, the first look at the new Ocean Kayak Prowler Ultra 4.7

Well what can I say, this is a NEW Prowler, lots of changes, about the only thing that is related to the previous Prowlers is the name… This is a ground up design which according to Ocean Kayak has taken over 18 months and close to $100,000, all done here in NZ “Designed by kayak fishermen for serious kayak fishing”

Even from the bow you’ll notice something new, the old toggle type lifting handle has now been replaced by a solid handle, no more snagging your line…

You’ll also see in the picture above there is a small flat section to add your GPS or VHF aerial.

Moving back we come to the hatch, this is a standard Prowler hatch, the Ultra will be shipped with the standard neoprene hatch seal, to close the hatch you’ll see there is a new four-way buckle, this is an Ocean Kayak designed item and makes for a much better fitting system.

Before you get into the cockpit there is a small bungy set up for securing any gear on deck.

In the photo above you will also see you have a standard Scotty rod holder mount and the new flat section allows for two more flush fitting rod holders if you want to fit them later. In front of the Scotty mount you’ll find the transducer access scupper. Also on either side of the foot wells you have two small areas that can be used for storage, these are scuppered.

Now the bit you have all been waiting for, the cockpit…

Yes that’s right you are seeing a fishing kayak, what do you mean “where’s the fish finder?”. Time to introduce the multi-function hatch cover… Time to turn it over…

Ah there you go, time to go fishing!

The hatch cover is double sided you lift, rotate, and place back down! One side for safe surf entry and exit one side for the serious stuff, so yes that does mean there is a well inside and yes it is sealed.

Plenty of room in here for a truck load of gear, place for up to two 7Ah batteries, this is where you will also get access to the optional rod tube, the rod tube goes back under the seat all the way to the stern, will take a couple of eight foot rods.

There are two more rod holders on the sides of the cockpit too, great place to drop you rod in while rigging up or unhooking your fish.

There is also storage areas under your legs fort a couple of small boxes, good for softbaits.

The side handles have also been replaced by flush mounted solid handles.

The seating area has been raised, to keep you dryer. The standard seat on the Prowler Ultra 4.7 will be the Deluxe Comfort Seat.

Behind the seat there is a new well, which can with an optional kit be converted into a live bait well, and the two rear rod holders.

The kit comes with cover, manual bilge pump, and scupper bung for the unused scupper, the well is symmetrical so the pump can be fitted to either side to suit the paddler. Of course if you are not interested in a live bait well this area can be used to store your gear or your anchor. 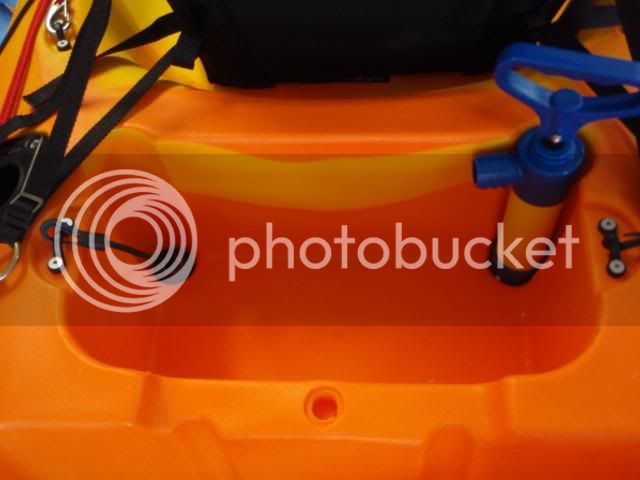 Moving further back we now have the BIG WELL, yep this is BIG, 1.1m long, bring one those big fish!

And for all those old Swing owners who miss their pods for putting your fish in, take a look at this…

That’s a full roto-molded foam insulated fish bin, roughly sixty litres, and only weighs in at around 5kg. The opening hinge is reversible so will suit left or right handers.

Nearly finished, the rear lifting toggle has also been replaced with another solid handle.

And finally the rudder, this is the standard Prowler rudder we are all used to.

Well that’s the top, now lets look at the hull, the hull has also been re-designed, the bow has been narrowed and flared giving much more lift and keeping the ride drier as the kayak will ride over the waves and chop and shed water.

The hull has retained the tri-formed hull for stability and tracking but much harder and fuller chines have been added. The Transducer scupper is retained but will now take the Humminbird Sideimaging transducer out of the box.

One final change to the hull is at the stern where there is now a sacrificial wear strip.

Availability:
Will be available nationwide from November 30th – if you want one before the holidays I’d suggest you talk to your dealer sooner rather than later…

So all that out of the way, I then took it for a paddle… This test paddle was done on Lake Pupuke, in Auckland.

This is a different kayak, you are not just getting in another Prowler, I paddle a Prowler Elite on a weekly basis, this boat is faster (apparently 15% faster), and although you sit higher in this kayak it seems more stable, way more stable, probably from the filled in chines. I was able to lean further out in this than my Elite before it got tippy. The biggest thing I did notice though was how quiet the hull is, the slap had gone, may be it was the lake factor, so I jumped in an Elite and yep there it was…

The cockpit is a better layout, will be good to see how it works in a real fishing situation, the hatch was easy to un-clip and flip over, everything seems to be within reach and no concerns turning around or sitting side saddle but again this was a lake…

I have requested a full sea trial and will post that review as soon as I can secure access to a kayak for a weekend, fingers crossed this weekend…

Hope you enjoyed this

A great write up and very interesting to read. I hope this kayak makes its way to the UK real soon.

Great post – look forward to a real sea test. How much faster is it *really*? The Big Game Prowler is the slowest kayak on the sea!

Looks really interesting. It will be useful to see if the bow really does lift over the waves rather than simply cutting through. At this length you’d think it would have even more of a tendancy to bury its bow when landing in the surf than the 15 foot prowlers. Looks great though!

Hi guys,do you do these in a cammo green?I need one for Lake fishing and Duck shooting.
Cheers A

Beautiful kayak and very good post!…hope to see one Ultra 4.7 here in Portugal very soon
Maybe is time to put my “old” P13 in classifieds! 🙂

Hello, from Portugal , i hould like to now when we will have this great fishing machine in Portugal, i want one for me, if you have any informations, please contact .

Great write up. Glad I postponed getting the trident.

Do you know if they will have this in a 13ft like they did with the trident 15 and 13.
Also in all the reviews and magazines the center hatch has what I assume is a priest. Is this correct and does this come with the yak or is it available separately

Gidday from Oz,
Just took this beauty for a spin on the weekend and I must say I am extremely impressed.
did a bit of lake, bit of river and bit of ocean and I have never had such a great time anywhere I went.
this unit is definitely faster than the 4.5 and even though you sit a little higher it is a stable as anything you could compare it to.
It was the driest ride I have ever had and it was just magic all the way.
everyone definitely needs to at least give this baby a test run and believe me you won’t look back once you do.
well done guys 🙂
Lozza Feb 2010

Loving this yak so far, the stability and speed of this kayak is awesome.

Hello. I really enjoyed reading this review. Its an interesting Kayak and I was wondering if you sell it in Colombia, South America. Do you have a representation here? Me and a few of my friends are interested in buying them right now.

I was debating whether to get another kayak to replace my Perception Freedom customised for fishing by me, or a fishing boat. Now there is no contest, I’m having the Ultra 4.7 with all the bits as soon as it is available!

Ive had just about every fishing kayak known to man.I curently fish out of the trident 15 and its awesome.The ultra is a sweet boat but the price is crazy.By the time you cuastomize it you could buy 2 Hobie outbacks.I would like one but at that prce for a piece of plastic the trident 15 is just fine for me.

Great review, nice an clear pictures too.
My goal is to own the Ultra 4.7 in January 2011

I cannot find the live bait well Kit for sale any where?

hay guys just got the ultra 4.7 here in east tenneesse. wow what a kayak i love it. had a 2011 cobra marauder xf the frist kayak they sent took 8 weeks . had color blems all over it so i returned it .and waited 12 more weeks to ge tthe next one it was now december to cold to test out this one so i waited again till mid apirl and so i took it to the lake and to my surprise the boat leaked in the hull around the live well ,
so i called corbra and talked to wes and got the run around was told i had to wait for a new one again lol this took a year from the frist order so i said forget it got my money back and im gald cause now ocean came out with the new ultra 4.7 and it smokes the marauder in craftmanship ,rudder is so much easier to use ,drier ride ,more stable, alot more thought out kayak than i have ever seen keep up the good work p.s my girlfriend wants to get the 4.3 when it comes out thanks travis