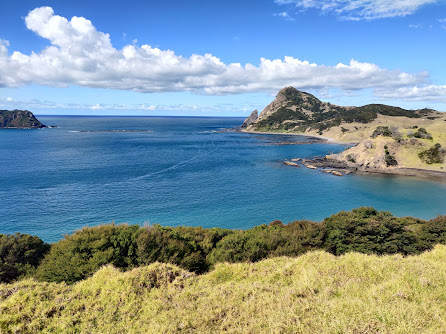 I went for a trip to the coromandel with my family over the weekend to sprinkle my grandfather’s ashes. Managing to pop out for a quick fish on the Saturday morning.

Conditions were pretty windy, with some squalls of rain and a bit of swell coming through. So the plan was to stick close to shore and try get some shelter from the headlands.

I had a new skute I’d tied up the day before which I was keen to get in the water. 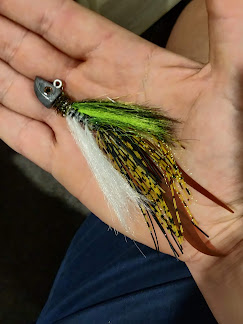 A few fruitless casts en route to set up my first drift which I picked up a nice pannie first cast in quite shallow.
I had a couple touches over the next 10 minutes of my drift before what felt like a rat kingfish hit my skute hard near the surface. Pulled a fair bit of line before I got it under control and back to the kayak, it turned out to be a horse of a Kahawai! Sashimi and smoked kahawai for dinner!

After a few more casts without any action I decided to head back to re-start my drift. Started winding up my slider that was sitting in the rod holder and got hit by another pannie snapper which went in the bin. It was a deformed snapper, with skin growing over one of its eyes.

After returning to start my drift again, I had a few casts of the skute and briefly hooked something that felt like a decent snapper but it got off before I could tell for sure. The next 10 minutes were pretty quiet so I returned to the shallows once more.

I had spied some waves breaking over the nearby reef and decided it was time to throw a lure into it. Some of the larger swells were smashing over the reef, washing over it and onto the side I was on, which was nicely sheltered from the waves. 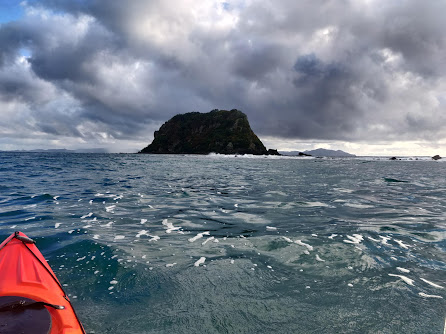 I got in nice and close and the first cast picked up another nice little pannie, which I decided to release. I made a couple more casts in the area but the wind had pushed me away from the reef, so I paddled back in close again – spotting an area where plenty of water was washing out from the reef like a little river mouth.

“Mmm that looks like a good spot for a snapper” I thought as I cast my skute right in to it, thinking shit that’s a bit close, I might get snagged here. So I quickly flicked the bail arm over and reeled in some line. For a moment I thought the lure had caught on a rock, but that was quickly put out of mind as the reel started screaming! A big hungry snapper was on the line.

I adjusted the drag and started trying in vain to win back some line. I wasn’t sure how much depth I had to play with so I had to be aggressive on my 15lb braid, fearing the fish would reef me.
With the kayak getting towed around a bit, I would gain a couple meters then loose a couple. It was a good fight, but eventually saw Mr. Snapper come to the surface.

I was still worried I’d lose it. Got out my lip grippers which barely fit around its lips! Meaning a bit of fumbling before I finally got it on board, letting out a yell of triumph and a sigh of relief. 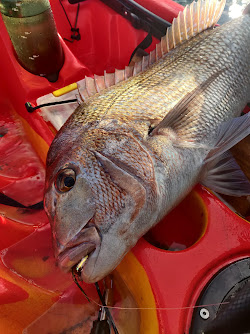 I was stoked to finally get a decent snapper on one of my homemade lures. That was the end of my fishing for the weekend, I had got what I came for and was keen to get back for breakfast (and show off my catch

After sprinkling Grandad’s ashes that evening, the family had a feast of snapper ceviche, kahawai sashimi and snapper heads (Grandad’s favourite). An appropriate send-off.
The bigger the mission, the better the fishin'
Top

kool report mate, love it up there at Fletcher bay
Top

Great TR. Fishing the wash and fighting a big fish...such a cool and exciting way to catch fish......always a chance of hooking a big one
Top
Post Reply
3 posts • Page 1 of 1