So I pulled the trigger on a Profish 400.

Caught a bit by surprise by how 'Lite' it is not.

Anybody got any tips for loading kayaks onto roof bars without buggering up your car (or yourself) in the process? Subaru Forester - so it has that plastic wind spoiler thing on the back.

(I knew I should have bought that old jeep for $2.6k - could just sling the yak at it until it hit the right spot...)

Edit: Which I see has just gone for $350 on TradeMe, although the owner seems to parked it in some road side bush between when I looked at it and now so has some extra character on the front end. Somebody got a bargain.
Top

I scored rhinorack side loader http://www.rhinorack.co.nz/products/roo ... oader_rusl recently from trademe for a really good deal.

This helps me a lot on loading and unloading my kayak to the roof. There’s also a lot of DIYs out there to give similar result

Looks awesome, does it fit on any rack ?
Top

If you can find the space to store it, a trailer is far better for transporting kayaks short distances than a roof rack. Far less damage to the car and kayak.
Top

the rest of us manage just fine following the directions of mr tapp:

So it seems that you just need a towel. Will see how that works out for me, who no doubt will miss the towel. S'pose once the car is b*ggered you don't need to worry anymore anyway...

The Rhino Rack guy was at C&K when I was loading - did mention that's what I'd need. It's a nifty idea, but I like to reduce finicky stuff to the minimum, and that counts as finicky to me.

Seems that I still had the FF battery mounted - removing that and taking off the baitboard cover seems to bring the weight down to a more manageable threshold.
Top

Does more of your kayak stick out in front or the behind the rack?
Usually more ahead of the rack so logically you'd fit the side loader to the back rack - but none of the advertisements use logic.
I've been using the side load method for a decade or two, in my case a tube (pole) goes into the rack cross bar. An alternative is a unit I built out of a bit of wood (or 2) with two pieces, one each side of the rack, a removable bar under the rack inside and a cross bar on top of the rack out side.

Do put something on the end to stop kayaks sliding sideways and off the loader.
Top

I slide my Stealth 495 on from the back using the C-tug positioned right at the back over the rudder. Towel placed on the rear wing protects the paint and I can easily lift front of yak to rest on wing. Using the anchor line I walk back to the rear and lift/slide the yak the roof racks. You do need space behind to do it but if you park on a ramp etc shouldn't be an issue. Those that know the 495 they are a beast put of the water so making it a solo mount was a necessity. Hyundai IX35 is the vehicle so not that tall. Hope that helps as an idea [emoji41]

Sent from my SM-G950F using Tapatalk

So here's the solution.

I made a fancy extension frame I could use that attached to one of the racks and all that - then one night I just thought "stick a dowel under the racks, then lift the front of the yak onto that, push it up and onto the racks, then flip it over as per the 'How to load a yak" video a few posts back.

I put the front of the yak into the angle between the dowel and front rack, grab the handles on back of the yak and push it up onto the front rack while lifting the the rear onto the back rack.

And if you don't mind driving around with a dowel strapped to your racks, hassle free too.

I suppose if you use those supports you wouldn't even need to flip it over. 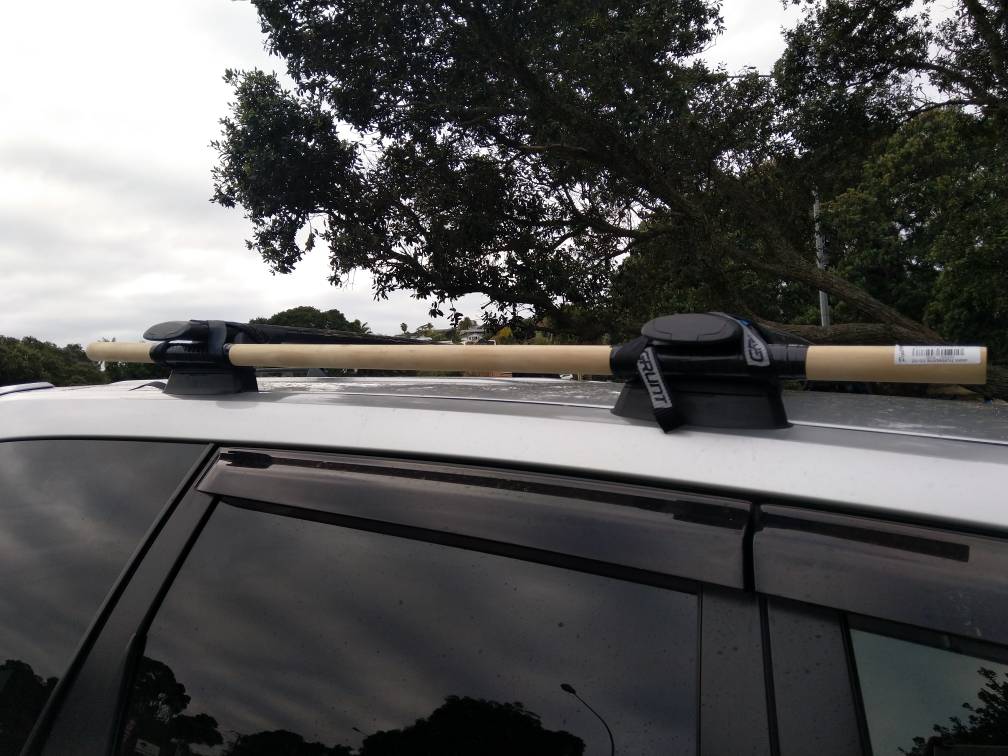 Sent from my Nokia 7 plus using Tapatalk

Just run a tie strap between the bars on one side and rest the front of your kayak on that before lifting the back end up and pushing it into position, Easy.
Also I use my cars floor mat to rest the back end on to avoid damage
Viking Reload

I have the rhino rack thingy from the link above
quick to assemble & pack away, easy as to load the yak up.
I find my reload is awkward to pick up & place on the roof rack in one continuous movement
I'm guessing my shoulder strain has come from either doing that or wrong habit in paddling Heres a bit of a laugh ! Oh, by the way ..... Trailer . I drive a Nissan van, & paddle a 4.1 Prowler , and after heaving it up onto the van for a while ,I got pissed off with that, so since putting the boat in was only a short drive , like about 2km & no highway etc , I slid it in the van & chocked it at the back. There was a bit hanging out the back , but hey , just down the road eh! So I bungeed down the tail door, off I go .
This was good for some time , probably illegal but you know how it is , pensioner in a van, no gang colours ,she'll be right! And pretty much it was until , just as I was turning into the launching area this guy cut me off .!!!
Slam on the brakes.
Having got somewhat complacent by now with the ease of this whole exercise I hadn't chocked the front of my boat , and with alarming speed , but almost in freeze-frame ,if you get my drift, my baby punched its way out my windscreen from the inside, much to the amusement of all concerned . Stone faced , and grim, I conceded defeat, but I'd had a hard day at work, you know , I'd torn a fingernail, been made redundant, the boss had run off with my wife, and the IRD, were looking for me , my neighbour had run over my cat, and my dog had savaged the kid next door! So I went for a paddle anyway! The next time I went out some time later , I used a trailer .
Top

Ive got one of those wind deflector/brake light things above my cars backdoor. Thought it was there to load my yak..... Easy as, lift nose onto plastic/flexi/brake thing slide yak up onto racks... Its got a few scratches but my backs feeling good

I use a “caryak” to load a double kayak on my Toyota surf. I have a new wagon now and 2 kayaks so am using a trailer instead, mainly so I don’t drip salt water on the new wagon. Possibly a bit precious but does mean the caryak is no longer needed. Happy to sell for $50 +postage. Works like you see in this video https://youtu.be/KBUgAhClwDs
Top

So he puts it on the front rack and then has to slide the kayak forward on the racks. If he put the extender on the back rack the kayak would be loaded where it needed to be. As the car is shorter than the kayak he would still be clear of the front of the car as he loaded it and no sliding.

All the other YouTubes show blondes doing it and again using the front rack. The only one using the back rack is some bloke such as SitDown as shown above.
Top
Post Reply
15 posts • Page 1 of 1

Jump to
Powered by phpBB™ • Design by PlanetStyles