Started a trolling motor build on my Reload.

Here's where you get your hands dirty, so to speak. So if you like to build or customize things for the yak, this is your forum
Post Reply
15 posts • Page 1 of 1

Well, I got bitten by the motorised bug, usual excuses.

I've bought a JW Watersnake 54lb Venom SWX ,12 volt trolling motor and coupled it with a 120 A/H battery. (Should do the job)

I've looked at multiple installs with the trolling motor at the side and while it might be easier to clean weeds etc. off the prop, it seems an unwieldy way to have things set up.
I'm looking at having it at the rear, with the battery up in the front hatch to counter balance it.

On my wish list is:
Steering via the foot pedals, not to a rudder but directly to the motor. This is meant to give a better response.
Instead of the 5 forward/3 reverse that comes with the Venom I wanted a maximiser for the energy saving benefits and finer control that they give.
Capacity to fully remove the motor from the water when anchored/launching or not in use.
Reverse!... A bit trickier to achieve when coupled with being able to remove the motor from the water.

I needed a transom to mount the motor... I had a Mark 1 Stainless steel rudder on my Reload. I've kept part of the mount and cut a 5mm Aluminium plate that bolts to the rudder mount 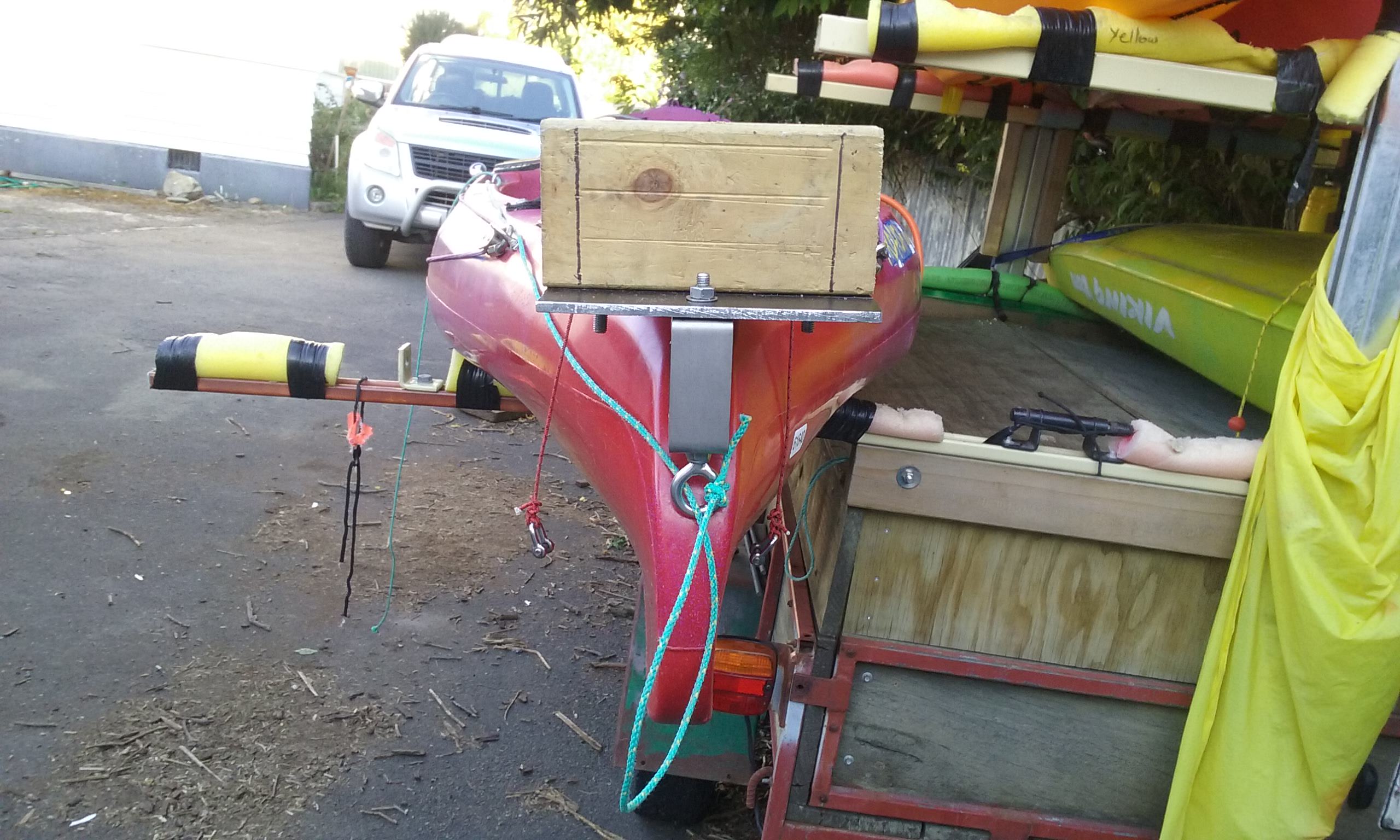 and every other bolt hole at the rear of the kayak... 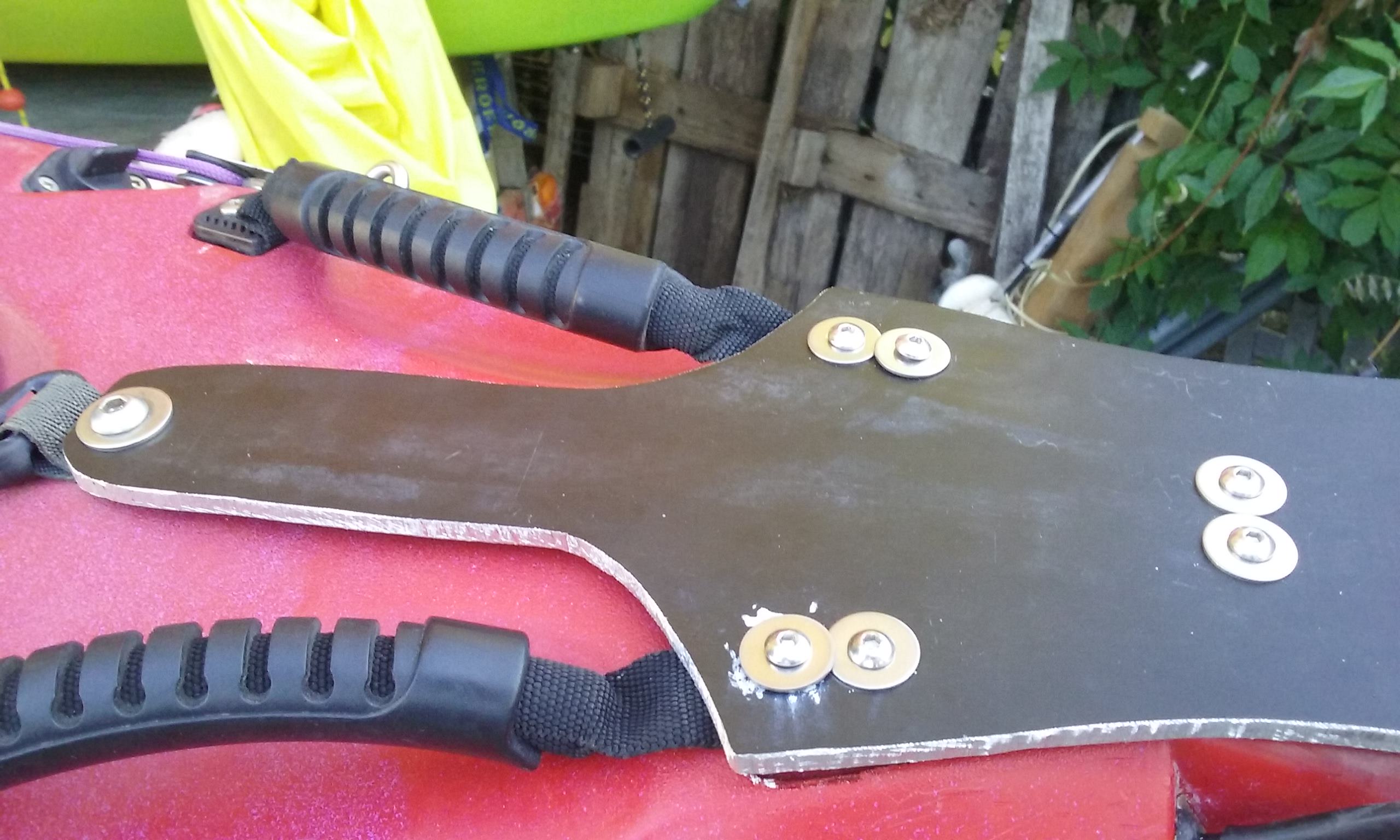 With the obligatory ropes, I can deploy, withdraw and steer the motor.


To get the motor to deploy/retract, I had to remove the lock that normally sets the trim... I have cable tied the shaft in to the unlocked position.

That meant that reversing would have pulled the motor out of the water, not drag the kayak back... to overcome this, I have put in a rope (Green) that I pull tight to hold the shaft in position.

The steering is via the standard rudder pedals, I removed the bolt that held the collar that controls the depth setting and replaced it with a new bolt and 2 Rail Blaza knobs... I drilled out the knobs and fitted the rope that connects to the rudder controls. 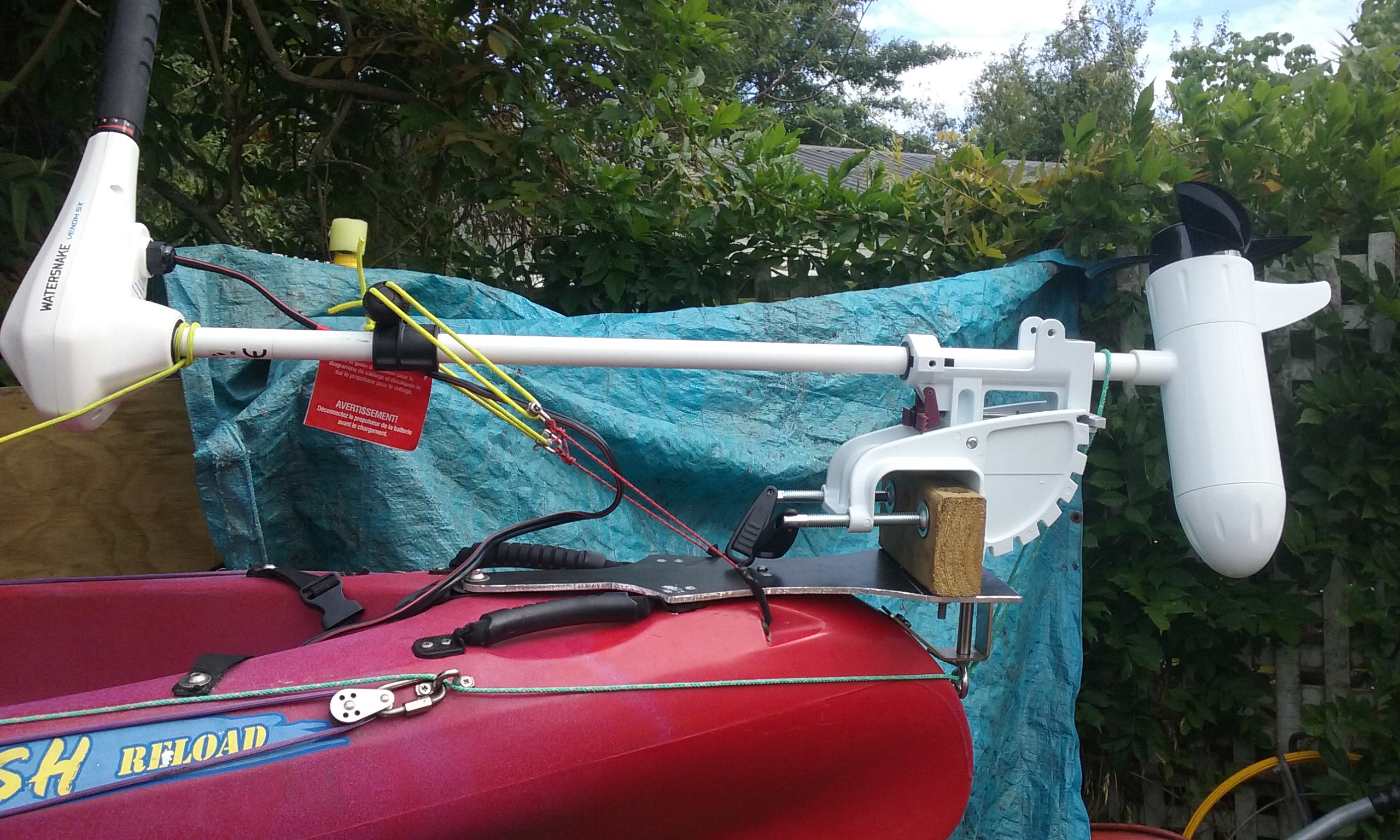 The maximiser parts were mostly sourced from Ali-express. They are all rated for 100 Amps so I hope that they'll be OK for the 50 odd that is the motors supposed max draw. 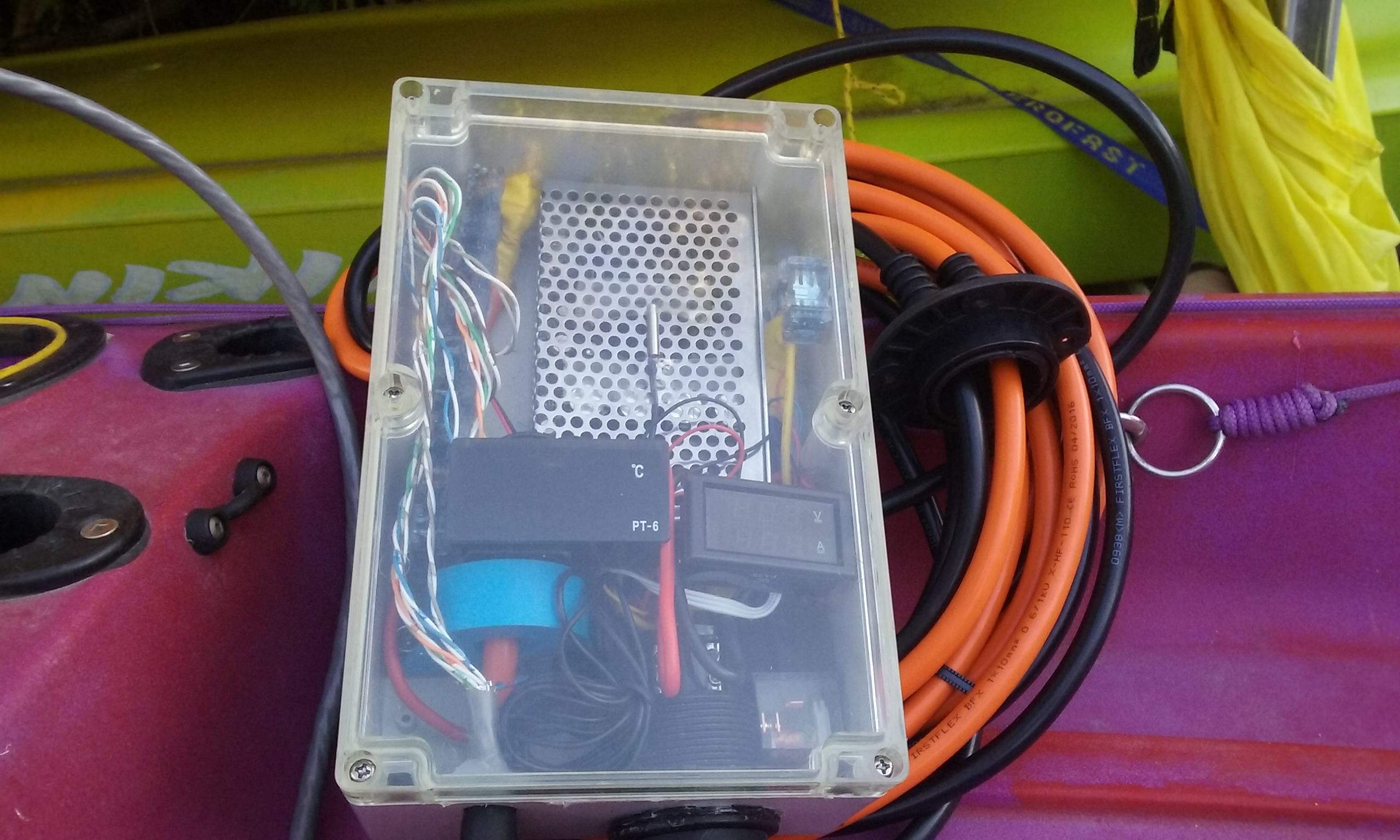 I bypassed the standard controller to get it to work.

I wanted the controller to be attached to my PFD, where I could get to it readily and keep it away from the water as much as possible.

Kill switch, Forward/reverse ('cause I couldn't find a bi-direction pot) and speed/voltage adjust.)

Still to come... Circuit breaker, some straps to hold the battery inside the kayak when I turtle. Smooth the edges of the aluminium plate and paint it.

Some time to get out and try it out on the water.
Top

A lot of work and thought gone into that.

If the prop is too far down below the keel when on full turning lock would it have a tendancy to drive itself up and tip you over ?

Not sure... I think the full left or right turn would be a slow speed thing.

I'm not sure how much effort turning the motor will take while it is operating... it might not swing as freely in the water.
I could extend the handles where the rudder controls attach to smooth out and dampen the turn.
Top

I had some spare time today...

I already had a large bung behind the seat. I bought a similar bung and ran the cables thought the plug. I can use the original plug to seal the kayak when the trolling motor isn't needed.

The corners of the battery sit under the front part of the hatch and the wing-bolts stop the battery from moving around enough to fall out. I hope 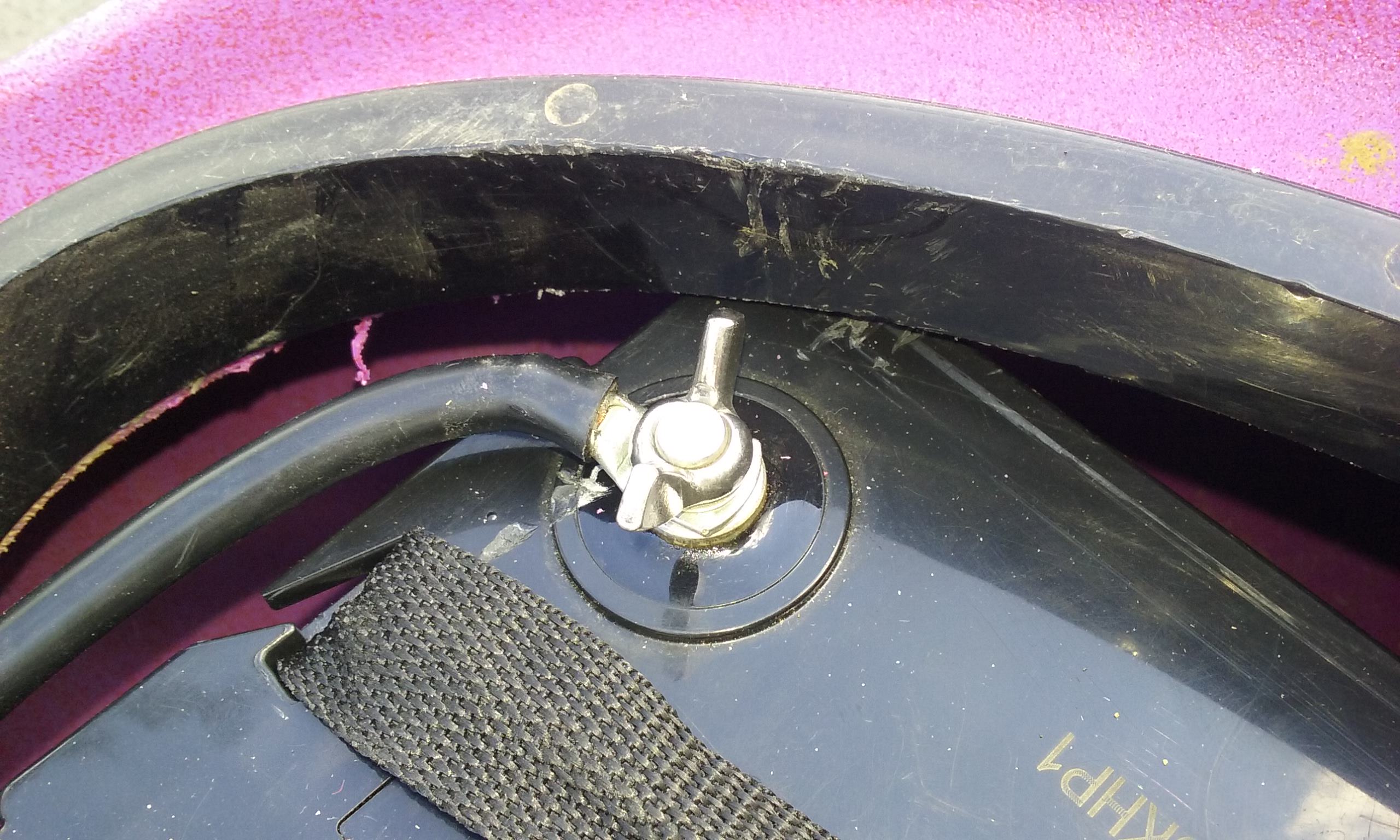 I have mounted the maximiser onto my flag pole (a old telescopic surfcaster) with short tie-down straps.

It sits well with my Chill pod... 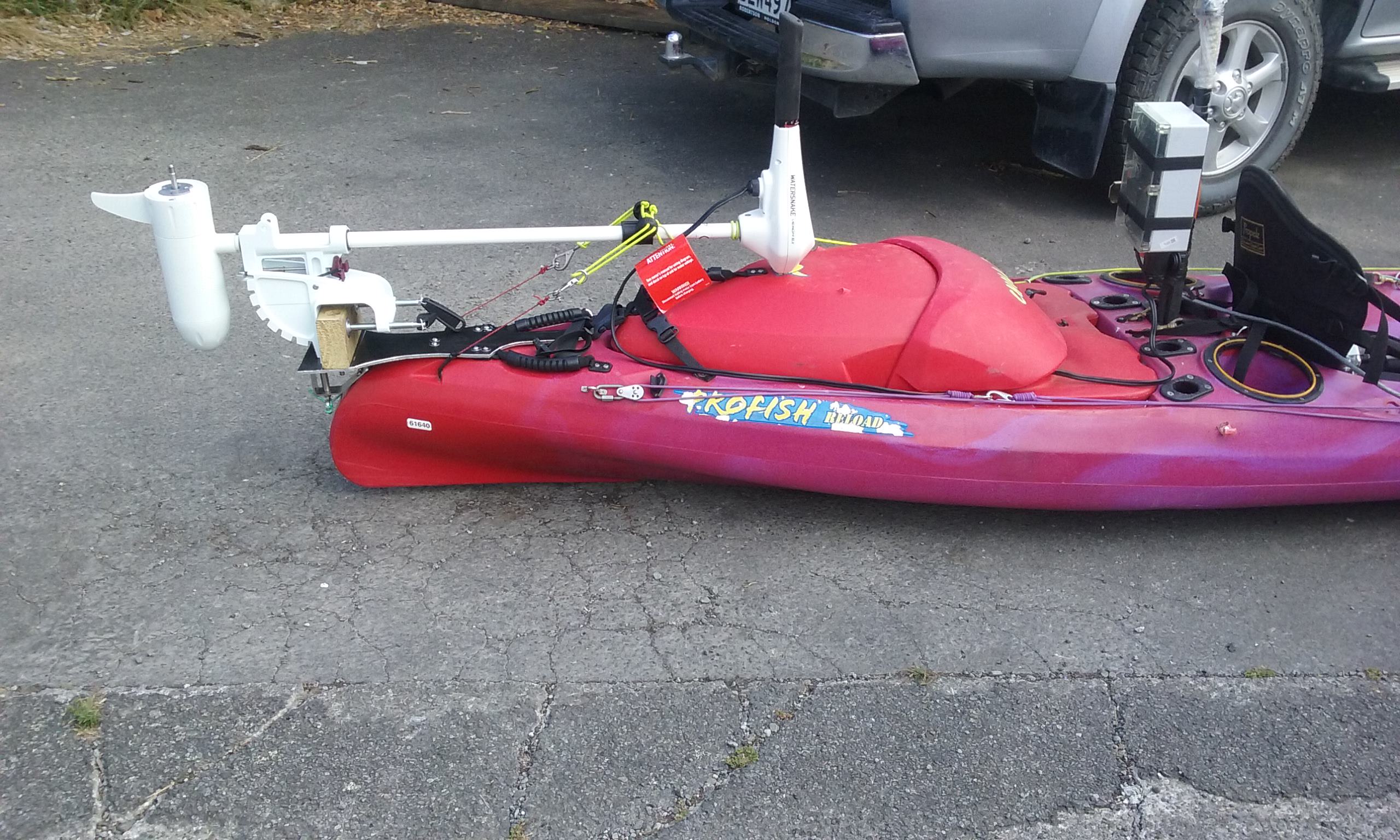 and the lid still functions. 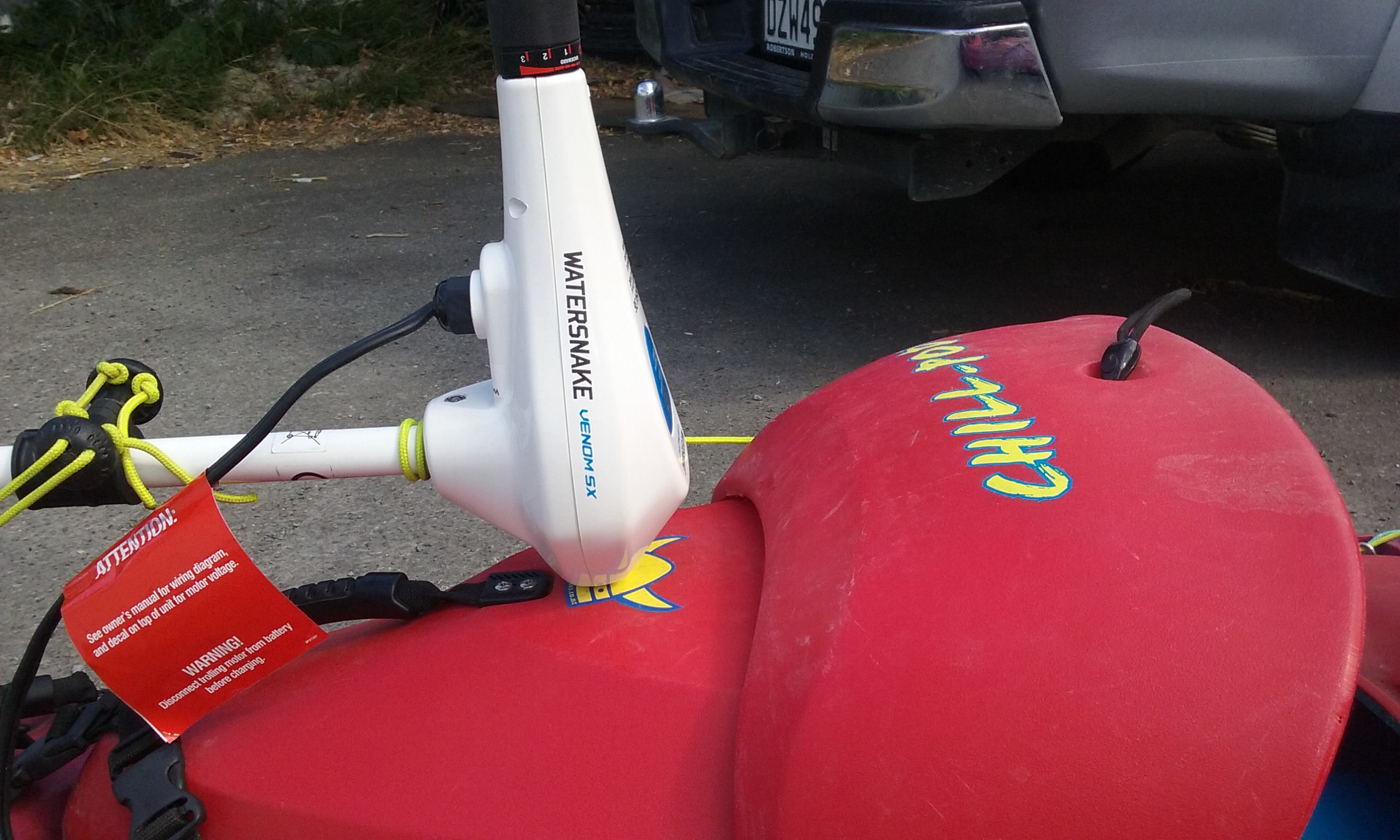 Hopefully, I'll get out to Castlepoint tomorrow to give it a whirl.
Top

Got out to give it a shake down cruise, no movies yet.

There was a bit of a swell out in the sea, so I just buzzed up and down the lagoon several times.

The only problem that I had was the cable tie snapped, leaving the motor locked on the deck. I replaced the cable tie with a piece of dyneema, hopefully that will do the job.
My maximiser worked without letting the blue smoke escape. That's good, as it's really hard to get the blue smoke back into electrical equipment.

Max speed was 6.9km/h, which is about all these things are good for.I will try some different trim settings to see if lifting the bow helps.
I didn't take note of the Amp's used, I need to sit the box on my lap for that. 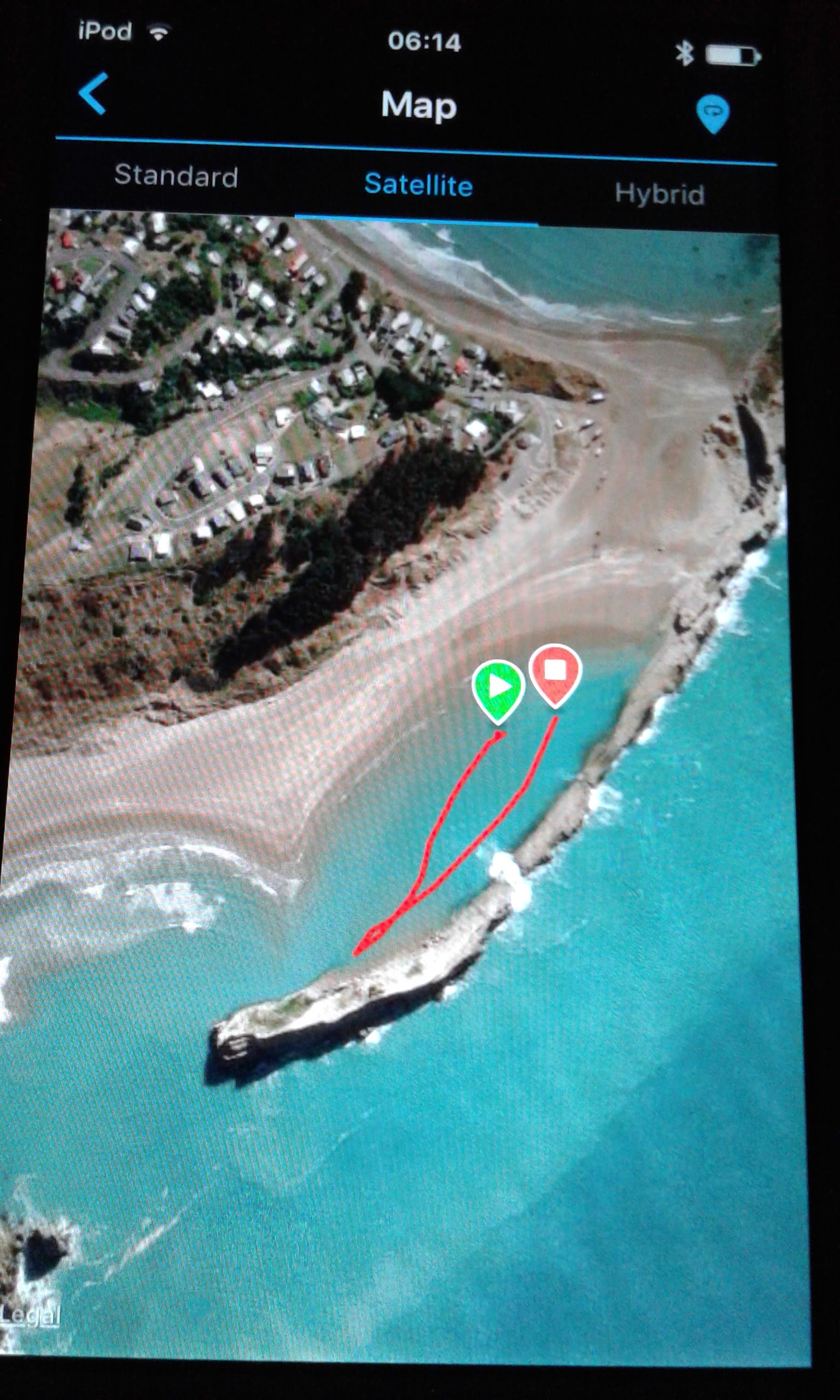 I gave it a run, in a barrel, to see what Amperage it uses...

Idling speed (not sure how much speed this produces) 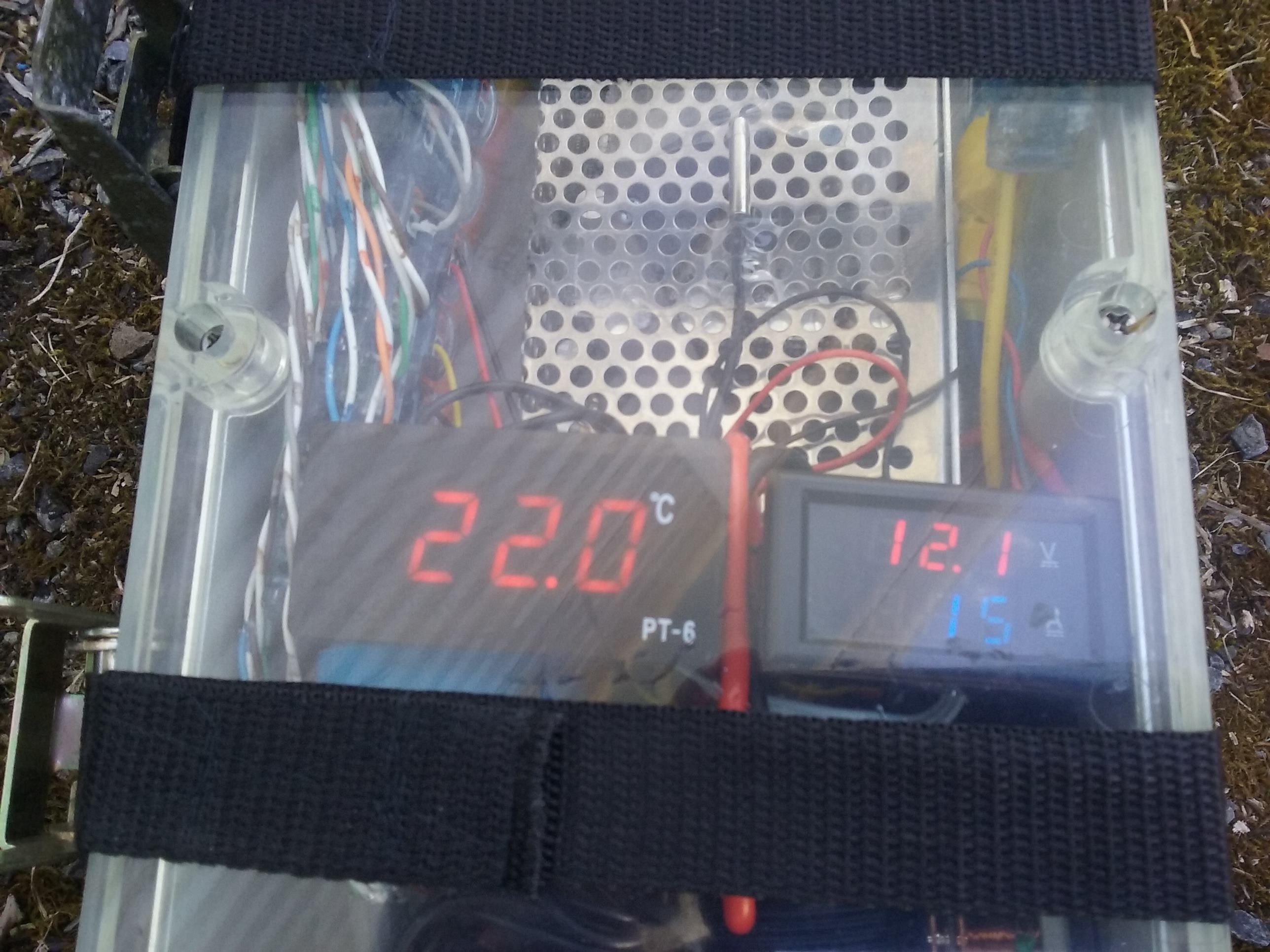 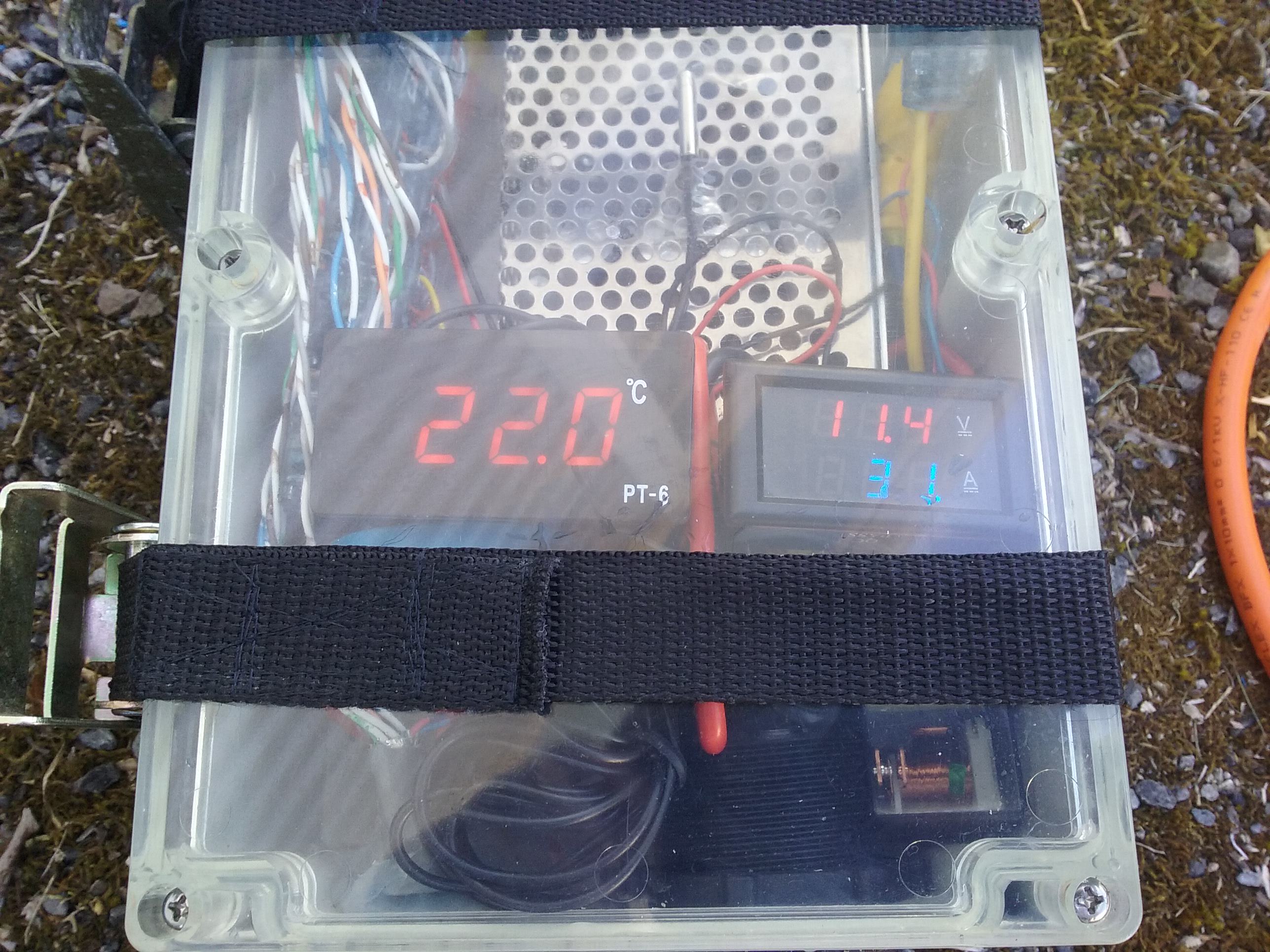 Max top speed from earlier was 6.9km/h and an average of 6.3, so a range of about 24km, non stop, at top speed?
More at a slower pace that I can be supplementing with paddling.

I can live with that, my usual trip is only a few km, with hours of sitting anchored in between.
Once I am confident that it is reliable, I can broaden my horizons a bit.

I'd be really surprised if you got 24kms from a 120AH battery. I would have guessed less than 10kms.

I'll have to give it a long run to see what it's good for.
Top

Actually I may be completely wrong.

I just measured the distance on Google Maps from Waitawa Park to a place I went to when I had that amp meter on. It's over 3kms in each direction and of course I didn't travel in a straight line like on the map. I had a 40AH LifePo4 battery at the time and I'm pretty sure I was well within the 80% max for the battery at the end of that trip. So if it was a 7-8km trip on 40AH, you might be spot on at 24km with a 120AH.

Wee Wifey was paddling with me for part of the way... and I couldn't have her passing me, (on her Espri) could I?
OK, fine! She's fitter than I am!
Crazy lady runs, cycles, kayaks, paddle boards and swims.

I've just started a project too, and I noticed that the kill switch that you've got is potentially similar to what I have bought. Was it similar to this?

Mine is only rated 10A - whilst my Watersnake T24 can consume up to 20A. I can imagine with yours it would be a higher amp - have you had any issues with it?

Hi!,
Sorry for the slow response...

I'm certain the one I have was advertised as being waterproof. I haven't had any problems with salt water corroding things in my hand held controller yet. It has been splashed often and dunked once or twice.
I got around the amperage problem by installing a 12v relay in the box of electrical parts that I built... the kill switch hooks into the low amperage part of the relay and the 30 amps out of the main part.

which looks like the wires are epoxied into the rear of the unit.
Top
Post Reply
15 posts • Page 1 of 1

Return to “Do It Yourself”